If it’s on the internet and in ALL CAPS it must be true! Whether it’s the GUY WHO TURNED $10,000 INTO $20 MILLION or the HOT TECH STOCK THAT WILL SHOCK YOU, you’ve probably seen some version of this fake news dozens of times a day. And, if you’re like me, you’ve probably clicked on one of these articles out of curiosity and quickly found yourself lost in a sea of misinformation. Sometimes it seems like you need to be a detective to decipher what financial news is real and what is fabricated. In this post, I’ll provide some information to help consumers be better prepared. 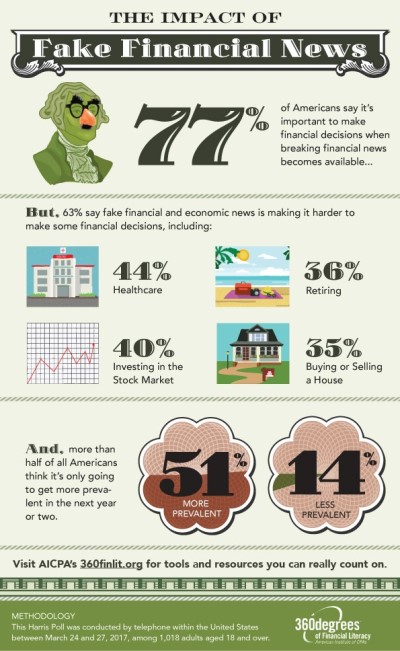 Completely fabricated financial news stories are nothing new, but with the rise of the internet and more people sharing articles on social media, fake financial news feels more commonplace than ever before. And that’s a serious problem. In fact, a new survey, conducted by Harris Poll on behalf of the AICPA to raise awareness of the scope of the issue and help consumers protect themselves, found that almost 3-in-5 Americans (58 percent) believe fake news is a serious threat to their financial decision making. Those sentiments are consistent for both genders, among household incomes and across generations – meaning that a lot of people from all walks of life are struggling with this issue.

Like me, many Americans (63 percent) are finding it more difficult to make critical financial decisions because of the spread of fake news. Specifically, Americans are having a harder time with healthcare decisions (44 percent), investing in the stock market (40 percent), retiring (36 percent) and buying or selling a house (35 percent). Americans are right to be wary, as these decisions can have serious, long-term implications and can be difficult to make even with accurate information.

The fake financial news forecast doesn’t look good – a majority of Americans (51 percent) expect fake news and misleading headlines to get more prevalent in the next year or two. However, with a diligent approach, consumers can separate real financial news from those fake headlines designed to mislead. The AICPA National CPA Financial Literacy Commission has five tips to keep all of us from getting lured into the fake financial news trap:

How to Make Accountability Work

Should You Get Cybercrime Insurance?